Skip to content
December 14, 2011 Author by megdaniellePosted in Conversation

Five minutes looking through Pinterest and I think I can sew outfits, create DIY jewelry, cook gourmet meals, and effortlessly put together crafts. Ten minutes later, I find myself at the local Hobby Lobby, Michael’s, or grocery store. In 30, I’m happily starting moving from Pin to table, determining my approach. In 45, I’m feeling creative and alive; I’m wondering why I don’t do this more often.

In 90 minutes, I’m defeated. I have crap and scrap up to my ears and I’m tripping over tangible failure.

It started with a casserole. And my first time using corn starch. 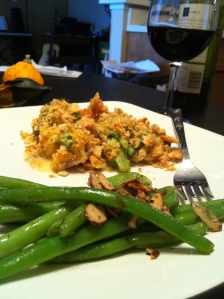 Corn starch is terrifying. I don’t know what it really is, but it sank to the bottom of my pan and sat, jelly-like, until I scraped it up. It balled up and separated into clumps while I called my husband and cried that I had ruined everything I had slaved over. He was on his way home, so I just stood waiting, panicking and stirring in front of the stove. Apparently corn starch requires adrenaline and tears to activate because after a few minutes, it loosened up and all but disappeared. Alien ingredient. I don’t like it one bit.

My second venture through Pinterest pages led me to an ornament wreath. A wire hanger? Not suitable for clothing but, by the looks of it, perfect for DIY wreaths! I picked out bunches of ornaments and heated up my hot glue gun. I wanted it to lay  flat on a door, so I sectioned it off and glued the sections together to hold form. 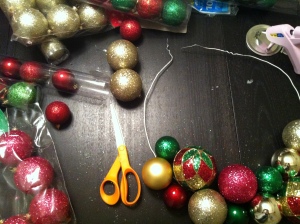 Little by little, I built up the wreath. I lifted it to check that it wouldn’t turn. Good to go. I finally reached the very top with ornaments and realized that I still need to make the ends of the hanger into clasps. Carefully, I twisted the wire.

Carefully, sure, but it’s still wire and that wire is temperamental! I twisted and twisted and grunted and let out a scream as the ornaments shifted and popped free of their glued places. Shattered ornaments slid down and around to the back. I tried several times to piece them back together but a wreath once broken can never be repaired. In the end, I gave up. I wrapped the last of my green wedding tulle around the top and threw it on the door. Who needs a full wreath anyway? 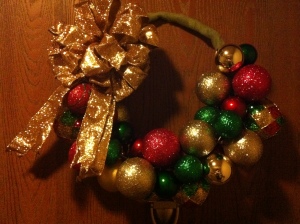 After the wreath, I decided I didn’t need to pay for a bow to tie around my next craft. So I bought gold, wired ribbon and went about fashioning my own. Pinterest supplied the blueprint, but I learned too late in the game that both sides must be the same in order to achieve the desired look. Otherwise, you must twist it each time you come to center to maintain the same look around the bow. It’s a hassle. And it makes it harder to get an even bow. Which I now know.

Feeling inspired by some saved mishaps, I went back to food. Pinterest led me to Nutella cookies. I love Nutella. And I love cookies. This had to be a no-brainer.

There were only three other ingredients; I thought this would mean success but four-ingredient cookies are chalky. And they burn. Or turn into cement. I’m not sure why. Just take my word for it. 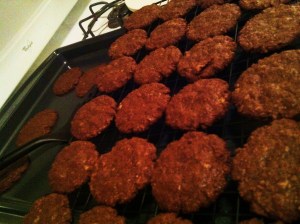 The point is, Pinterest tricks me into thinking I’m something I’m not. I get so excited only to realize that I’ve missed a step, or don’t have the touch, or didn’t think the project through. But that’s not the worst part. The worst part is: I keep going back to it.