Skip to content
February 11, 2012 Author by megdaniellePosted in Married Memories

Freddy and I have been fortunate enough to be incredibly busy in 2012.

I transitioned into a new position at work in the beginning of January and shifted my attention from the front-end of production to the back-end, pulling jobs through to meet customer demands. It’s a great change of pace, even if it means logging a lot more hours. Freddy and I have had to sacrifice some of our Saturday mornings together as a result, but we’ve agreed that working toward our career goals is important to us right now – so long as we continue to find time with one another and grow our marriage.

2012 introduced Freddy to a new position within his company as well. He moved locations and is now working to establish Grand Rapid’s new home of jazz. The change is full of new opportunities and growth and has kept him running since the switch. I still have him all Sunday long, but he’s also been putting in more hours between Monday and Saturday to adapt. This means we have less time on weeknights to catch up on our daily happenings.

By Sunday, all of the small conversations that would usually happen during the week come stumbling out. It’s led to some sparks, some full-out fights, and honest effort to make up on all the quality time that we’ve missed throughout the week. We’ve had miscommunications along the way but take comfort in that the area we identified as a potential stumbling block during our marriage prep (communication) is exactly where we’ve been stumbling.

We’ve spent as much time as we can getting back to the basics and working to speak each other’s love languages. It’s amazing how deeply you can love someone and how little of that they feel when you’re only speaking to them in your own language. I’m happy to say that our efforts have been paying off! We’ve been working to fill our house with acts of service, quality time, encouragement, and praise to replace any anxiety caused by too much time spent apart. It comes down to being conscious of our interactions which in turn leads to longer hugs, bigger smiles, gentler spirits, and a lot more laughter. 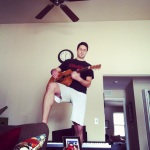 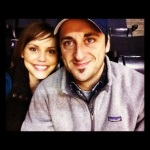 Freddy and I are both working as volunteers on Sunday mornings at our church. Freddy works with a group of 4th grade boys and I work with a group of 4th grade girls; the 4th and 5th graders are in one main room together on Sunday mornings before breaking out into our groups. Freddy and I prep together during the week at the dinner table or on our couches (when we can make the time). It’s fun to prepare and recap our time with the kids… Some days, I think we take their lessons to heart more than they do – but we’re trying!

We hosted a Superbowl party in our ever-shrinking apartment this year and got to pull out all of our party trays we received as wedding gifts! We might not have the biggest screen around, but we do have the greatest friends.

We’re trying to take a better interest in our physical health too! Freddy has been committed to knocking out his P90X workouts every day and I’m working with our gym to get a workout plan drawn up so I can start getting back that energy that seems a distant memory to me.

We’ll be heading up to Traverse City next week for a family potluck outdoors and cannot wait to see everyone! With everything that’s been happening, we haven’t been able to make the short trips that we thought we would to say hello. Life happens fast, you know?

And that’s it. That’s what we’ve been doing so far in 2012. Despite a list of any serious resolutions, we’ve implemented several changes already this year: A lot of work. A lot of learning and loving. And never enough time!