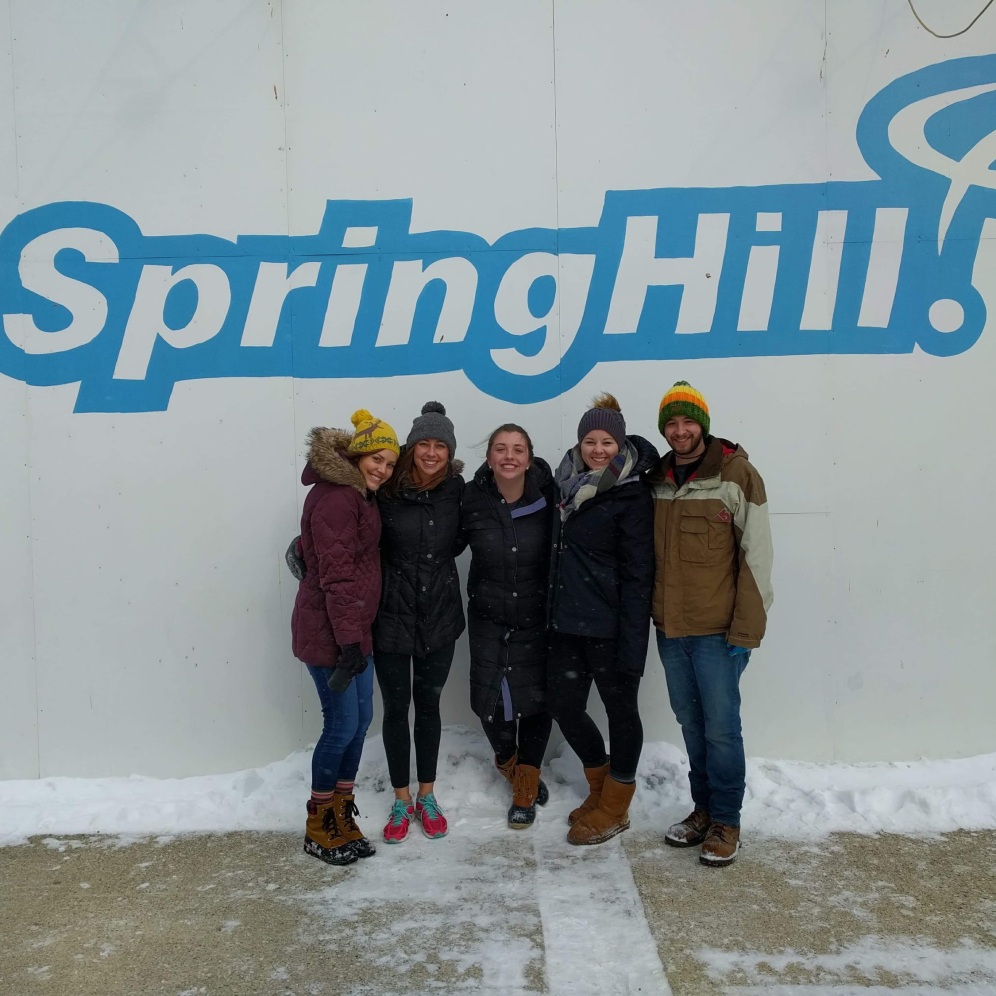 This past weekend I headed north with 700+ students, my fellow small group leaders (Aren’t we a good-looking bunch?), coaches and church staff to SpringHill Camp for what is lovingly referred to as “Snow Camp” 2018 edition.

I usually take a lot of flack around this time of year. Everyone loves reminiscing about my very first weekend as a small group leader when I showed up without a sleeping bag, or a pillow, or shampoo or conditioner or body wash or …well okay, the underwear was a bit extreme; that’s fair… but I promise you there are places that provide all of the other things for you. For the record, they’re called hotels and they’re amazing.

Each time I go to one of these weekends, I end up learning a little bit more.

A little bit more about roughing it (with plumbing and heat and electricity, of course). I remembered all of my clothes this trip. I packed a flashlight. A selfie stick (obviously). Wool socks. Heavy duty gloves. Layers. I even packed Poo-Pourri for the cabin which I assure you was indeed worth it. Have you ever spent a weekend with a cabin full of people and camp food? Enough said.

A little bit more about people, most of whom seem to function a little bit better on very little sleep, camp cuisine, and copious amounts of coffee than I.

And a little bit more about myself.

Some years it’s spiritual. Or it’s about my friendships and the joy of being around other people. Sometimes it’s about just how competitive I really am. This year, it was about caring less about rules and what that feels like. It was about fun. About taking a walk on the wild side!

Okay, the moderately untamed side.

Fine, the mostly tamed side.

I’ve been mulling over some thoughts recently about rule following and what that looks like as a child of God. Spoiler alert: I don’t think it means what I thought it meant.

Growing up, we’re taught rules of obedience. Think 10 Commandments. We have should and should nots to consider and, for a natural born rule follower like myself, it can feel pretty nice to be able to draw lines down the split of right and wrong. I am a great rule follower. That must mean I’m a pretty good follower of Christ, yes?

I’ve been reading more and more of the Bible recently and the people in these stories have one glaring thing in common: They’re rule breakers. Rule followers like me subscribe to certain truths; 99% of them follow rules because they favor security (that statistic has been entirely fabricated based on my own personal truth). Some of these Bible characters are reformed rule followers, I’ll give you that. But these are people who are called to stand out against the rules. Break the norms. Confront leadership. Tell them they’re wrong. Social status? See ya. Respect among your peers? Nope. Let’s be honest, on top of having little concern for security, a lot of them were grade A weirdos (I get that that’s not really relevant here but I needed to get that off my chest).

If we’re made up of a series of strengths and weaknesses rather than good and bad then I’m starting to see my friends with a little bit more of that rule-breaking edge as having a competitive advantage over me in the realm of being a Christ follower. *GASP* They’re less prone to worry and more prone to action. When God calls, are they more inclined to move?

Spontaneity is not one of my strengths. If someone tells me that I need to move across the country and leave my things behind, you know what I would say? No. I have a job. People depend on me. There are loose ends that need to be tied up. What would people think? I like it here. I have food in my fridge that I need to eat first.

There is a pattern of movement to which society subscribes, to which I subscribe. They’re essentially social rules and I’m starting to see that following them doesn’t make me a great Christ follower.

So this weekend, I let my girls fling rubber frogs across the auditorium long after the time to do so had passed. I encouraged them. I joined them. I signed my name on a bunk; it always seemed wrong as a kid but I did it. I ran up to the edge of the tubing hill and went face first over the drop. The tubing hill attendant assured me that doing so wasn’t breaking the rules but it still felt a lot like breaking the rules.

They’re little things. They’re not illegal and they’re not hurting anyone (There may have been a few errant frogs but I promise they were only minor annoyances). The point is, these things aren’t exactly following the rules either. And since I’ve been taking a more honest look at the strengths of those around me, I’ve realized that I need to flex that muscle if I want it to work when God calls on it.